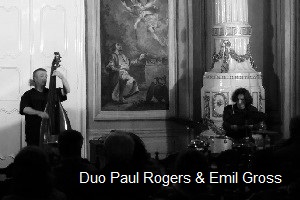 “…His playing is rich and varied, from dark droning moments to barely touched silence and faint birdlike sounds, to pulsing deep-souled jazz sounds…” “…Here is a man at the peak of his powers, creating beauty and deep emotion at the same time. Don’t miss it!…”
{The Free Jazz Collective about Paul Rogers solo Album “Being” (Amor Fati, 2007)(Link)}

“…Paul Rogers should be well known to anyone with even a passing interest in British free jazz…” “…Listen is a tour de force of the first order; highly recommended to any fan of solo bass, but for those who simply enjoy hearing a master improviser at work, there’s much to savour here…”
{BBC review Paul Rogers solo Album “Listen” by Peter Marsh 2002(Emanem, 2002)(Link)}